I have a banana loaf recipe that everyone loves, it is soft and moist and delicious which is very odd for my cooking -but anyway, I decided to feed some to Betty. It turned out good, more like biscotti which is expected. It is certainly tasty and rehydrates well but I probably won't do it again, we prefer my banana loaf fresh. 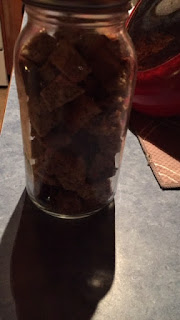 Banana loaf bites
After the banana loaf bites, I did 2 full loads of strawberries which I didn't bother taking pictures of since I've shown that here previously.
Friday was my birthday, I've decided to start counting backwards (MIL taught us this trick) so I am now officially 50. Yup, the big 50.
I had a fabulous day, it was massage day so Brad went to Nanaimo in the morning. I made porridge for breakfast, then had Pickleball at noon, Big Brother was on that night, we went out for supper to a local restaurant and I finished the night off (after cake, that is) with one of my favourite things -- a hot bath. Perfect day.
Our reservation was at 6:20, we were seated right away and not 5 minutes later, the power went out. We had a candle lit dinner at the restaurant (I didn't get a pic apparently). Pretty good meal, but knowing the power was out and betty was eating had us a bit concerned. Power was out for 1.5 hours.... well...
Without power, the ice (moisture removed from product) inside betty began to melt. When we returned home we cranked up the generator and got betty eating again - except she started over in freeze mode. I didn't think anything of it at the moment but then realized it wasn't right. I pushed cancel (10 or 15 min later) and it went to the main screen which showed the product was finished.
I released the pressure valve and nothing came out.... screen advised the vacuum pressure sensor was broken... "Oh, that's just great!". I released the pressure by loosening the hose on the vacuum pump... Then I checked online and thought through what had happened... 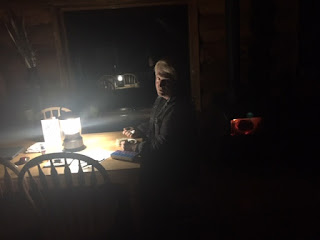 At home eating bday cake in the dark. We played crib until the power came on. 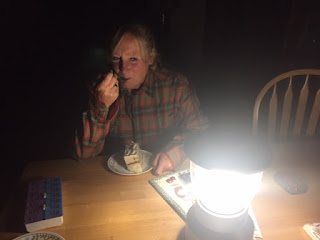 Stuffing my gob as usual 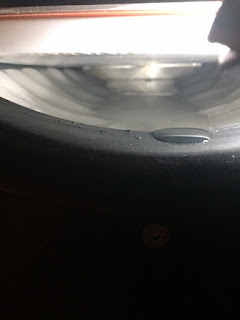 Inside betty's stomach
Cutting a long story short, I realized that because betty had sat for 1.5 hrs without power, that the ice had begun to melt, pooling at the drain and then the freeze cycle started. This clogged the drain with ice and would not allow the pressure to release. Whew. I allowed her to defrost naturally overnight and then in the morning I ran the original from factory tests to ensure everything was working properly - and it was! Beautiful. 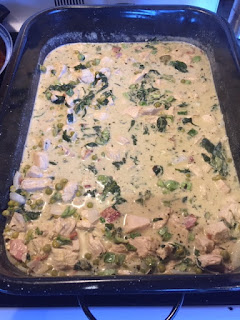 Chicken Thai Green Curry that Brad made yesterday to feed Betty, it is packaged into serving sizes and freezing in preparation for its turn in the machine.
At the moment Betty is eating 7 double servings of soup and a small leftover porridge, I expect this to finish early afternoon today, then.... 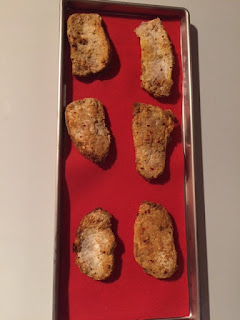 Pork Chops, prepped, cooked and ready for Betty
We will mostly do pre-cooked foods as it just makes sense to have them ready to go, although you can - and we probably will - do some raw meats as well. Just add water.
Today is my good son's bday (I have 2 good sons, btw)... Happy 32nd birthday little man! (He is a father to 3 now and 6'3 at about 225lbs but he used to be 8 lbs 5.9oz.) Those were the days. 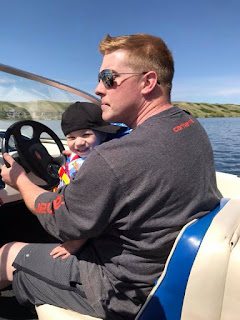 Here with my grandson Royce
Yes I was 20 and 2 days when my youngest was born - he's a Scorpio too. Yikes.