Grapes and Lasagna then Betty moves

Freeze dry peeps are always going on about how fabulous grapes are FD'd, so we gave it a go. 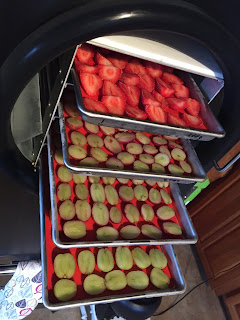 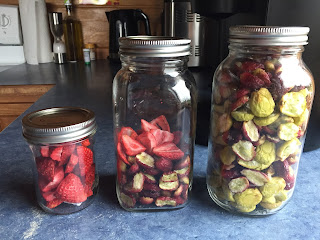 After: the grapes did shrivel slightly and this is not all of them... not sure what happened to the rest :D
I should have left them in longer (they were in about 24 hrs) as they were still a bit chewy, but I figured they wouldn't last very long anyway, so I jarred them with a moisture absorber.
The next day, Brad's lasagna that he had made in smaller containers planning ahead for Betty but we then realized they were still too big so he sliced them like bread and we laid them out on the trays that way. He also cut them frozen hence the mess... Next time we will slice them fresh and then freeze them. Its all a learning process. 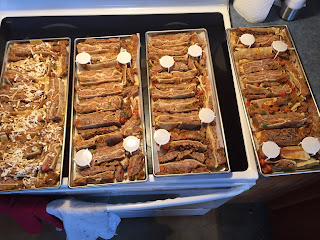 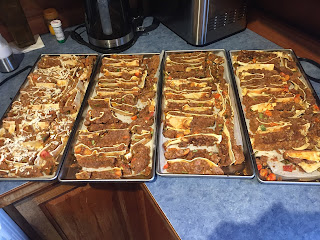 And all done.
We reconstituted a piece and it worked out fantastic. I know I need to do a video.... I know.
Originally we had Betty under the stairs 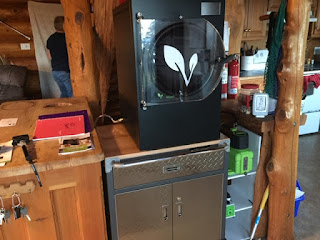 then moved her to the kitchen 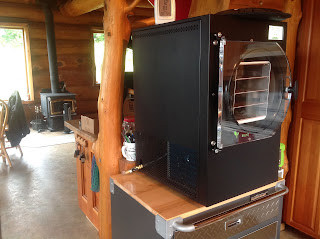 Yesterday, with the neighbours help we put her upstairs in my 'old' office... 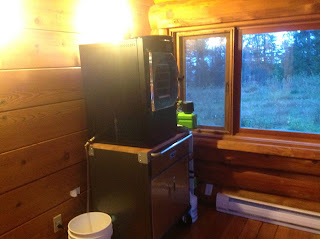 My computer table has now been set beside Brad's desk in the upstairs livingroom. This Premier pump is quieter than the other vacuum pumps on offer but we think it might be better in its own room. Due to the move last night at 630pm, the machine was jostled quite a bit and so we have decided to allow it to rest for 24 hours just to be sure we don't mess it up.
Tonight at 6:30..... cooked hamburger and the last of the gardens green peppers. Then we have my homemade banana loaf cut into bite size pieces and more strawberries. Strawberries are my favourite so far, although that may change after the banana loaf bits....
Posted by Gone Rogue at 8:54 am