Continuing with the Thanksgiving day leftovers, introducing - Ham and Green peppers (from the garden) 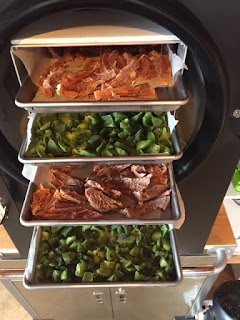 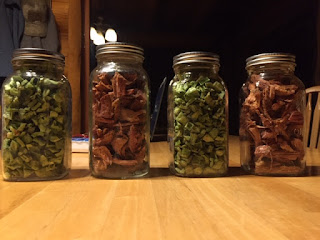 Once all the water has been removed via freeze drying
Left to right:       Tray 1 weighs 132g
Tray 2 weighs 23g
Tray 3 weighs 169g
Tray 4 weighs 17g
The freeze drying process removes all moisture from a product but it is not like dehydrating in that the product is frozen first to approx -10F (-23C) the trays are then slowly heated and as the moisture evaporates it is slowly drawn out by a vacuum pump.
A dehydrator just heats the product which causes it to shrivel up and the result is an unappetizing product, unlike Betty which leaves the product looking almost identical to when it was put in the machine.
I have some dehydrated pineapple now that I think of it, perhaps a comparison of the two...
#ButFirst I have to empty at least 1 freezer to make proper room for these trays.
Posted by Gone Rogue at 5:00 am