Leftover Thanksgiving dinner. There was so much food that day that we sent some home with guests and had a few meals ourselves but there was still so much leftover that we decided to run it through Betty - that girl can eat! So Turkey, Stuffing and Roast Potatoes... 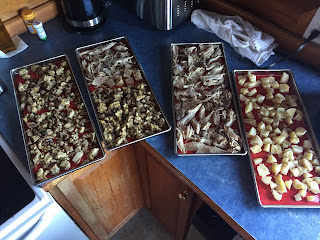 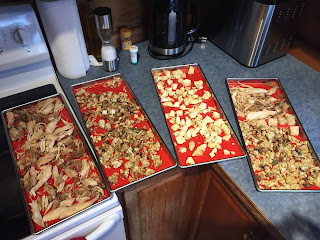 After
We got a little bowl and reconstituted small bits of the stuffing and potatoes just to be sure - they turned out great. Notice the stuffing shrunk quite a bit. 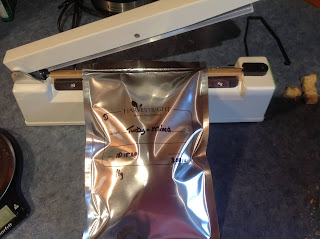 Into Mylar bags with a 300cc oxygen absorber and a quick seal with the sealing doohickey.
We ordered extra trays shortly after receiving the machine. The extra trays allow us to have the next batch freezing while the current batch is being done in the machine. This way as soon as the machine has defrosted (2 hours) from the current batch, the next is frozen and ready to go.
Flowergirl asked in a comment yesterday: Why we were using this machine.
Why not just can/freeze everything? A good question, for sure. Also does Betty change the flavours?
Here is my response:
The machine does heighten the flavour but on this island, the power goes out quite often during the winter we’re told. Fuel availability is limited (for the generator) and canning is such a pain and mess. This machine allows us to very easily process food and store it without power on a shelf. In the event of a power outage we’ve only to boil water in the wood stove, pour it into the bag, wait 5 min and eat. Roast beef, potatoes, etc. I prefer that to a jar of tomatoes any day. Besides, as you’ve read many times over the years - I hate to cook. This allows me to batch cook, freeze dry and on nights I don’t feel like cooking, I just boil water and we can have Beef Stroganoff, Spaghetti, Meat and potatoes... It might not work for some but to me this is a Godsend.
Now I realize that some of you probably think we got this machine as a 'Prepper' type tool. We actually, did not. Yes, a lot of preppers would/do use these machines. However, we found out about this while I was trying to figure out a way to preserve the ton of Romaine lettuce we grew in the garden. These are not inexpensive machines, there was a lot of consideration put in to the decision to get one. Energy consumption has been averaging $1.75 per day so about $50/month to keep Betty fed. Pretty damn good since Robbie eats more than that! Ha ha.
We are not 'Preppers', but we do like to be prepared. In my mind, (and maybe only in my mind) there is a huge difference between prepping and preparing. Living where we are and having lived through a hurricane and been without power for a week and unable to leave an island for 3 weeks once already- we have learned to be prepared.
Preppers go to a whole other level. So while we do have hand crank radio and lighting, we do not have a bug out shelter stocked with 50 years of stuff... I don't even know how to put this but I think you get the idea. We stock wood for winter because we know we will need it, we bought a generator and store fuel for it because we know we will need it, sure in the event of an SHTF situation we will have easy ready made meals but that isn't why we bought it.
Brad loves to garden and a lot of what we produced this year cannot be canned, almost all of it has been frozen, and if the power goes out for a day or two our generator will keep it cold - but... once the fuel runs out - everything that is left will be lost.
We hope to eliminate our deep freeze (as most FDers have) which will save us at least $50/month, so...  Also with the ability to preserve typical nightly leftovers we will save money on basic food waste also. Before purchasing I did a cost analysis and found that even without selling treats and the like at the local market Betty will pay for herself in a year.
Now, everything will be easily preserved, and we are grateful for it. Come hell or high water. :D
Next up Ham and more Green peppers. Then - grapes and strawberries are after that.
Posted by Gone Rogue at 1:45 pm