Our neighbour Kane and our friend stacey both recommended us to their mutual friend (even though the two of them do not know each other) who is moving to Vancouver and wants someone to rent her house. After viewing the Acreage and discussing it for 3 days, we accepted the offer. It is a fantastic property with an outside (modern version of) clawfoot bathtub with hot and cold water (inside bath as well, btw)... the house is wired up to an 11000w generator for the many power outages here.... there is room for a big garden and even a 'she shed' as well as a big shop in the backyard, which i absolutely loved. However the water had an incredible stench and so we accepted the offer with the condition that a filter system was put on the well water coming into the house, which was agreed to.
The owner has recently replaced the kitchen entirely but the installers made a right cockup of it, so it was agreed that we would fix the kitchen and also paint the house prior to moving in (at no charge) and we offered to do the gardens and make the house more presentable which would help her to sell in 5-10 years when she retires, as she wants to keep the home as an investment for that time.
Anyway, we were very excited and have been a bit preoccupied with the prospect. Unfortunately, in the last week since this process began the arrangement has been altered so many times and so many inconsistencies have come up that we have opted not to take the property. We are comfortable where we are and with housing being in such short supply on this island, we felt it better for us long term to stay put given the problems which have occurred with this deal in such a short time. 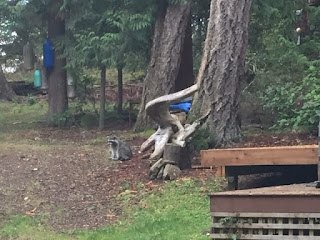 Racoon at the bottom of a tree at Stacey's house
Hoping to find a baby monitor so that I can keep an eye on Betty without having to go up and down the stairs, I went to GIRO which is essentially a ReStore. Everyone drops off the things they don't want anymore and GIRO (non-profit) re-sells them, minimizing the human footprint. 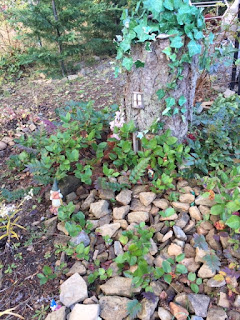 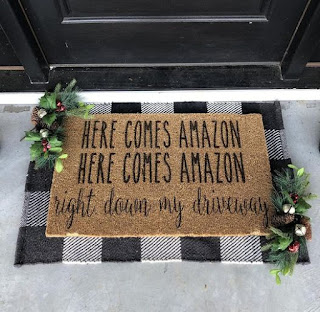 I did not find a baby monitor and have since ordered one from Amazon, but I did find a ton of molds. I've heard it said that Jello through the FD is Amazing.... and as I said previously, I am looking for fun and tasty stuff to do for the Grandkids - so I bought every mold they had -- for $10 and I could not be happier!! Those things are something like $10 each new... and I got 18 of them... What a coup. 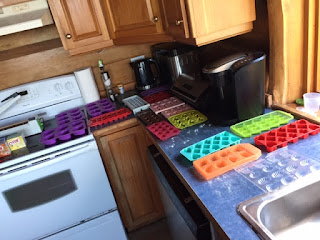 New molds, plus I had a rather large one already so I'm set.
The last batch were raw steaks we put into Betty and it took a long time (27hrs) but they finally finished and today we have a $50 ham which Brad cooked that is going in - shredded.
I have the next batch sorted already and that is Lemons, Limes, Zucchini, Cucumber, Apple slices with peels separately to be blended to powder.
Of course, yesterday I filled the molds with 3 different colours of jello which are now ready to be popped out and the other 2 colours I picked up can be put in to cool. They will be the following batch. I also picked up 5 flavours of pudding.... so you know where that's going.
Today I think I am going to Salt Spring to visit with Dana. Its a long day though since I've been up since 3:15am and didn't get any sleep....
PS Rick & Kathy, I may have fixed the comment thing... we'll find out soon enough.
Posted by Gone Rogue at 5:34 am