Since it has been 3 months since my last bloodletting, I dropped by the vampires on Thursday on my way to the ferry as I had a Dentist appt that day as well.
It only took literally 2 minutes (small island, small lab) and I was able to head to the ferry line to await the next ferry, except somehow I was in the line within the 'current load' parameters, I wasn't quite sure if I'd make it on -- but I did, 2nd last. Now I had an extra hour on top of my already extra hour before my Dentist appt. What to do?.... Spend money, of course.
I decided that since we're so close to Xmas, this would be a good opportunity to get my shopping done for His Lordship and Robbie. So I headed off to make the pennies scream...
I also picked up a few things for gift baskets as I've sold a couple already (someone in Ontario even ordered one as well as a banana bag and spent twice as much shipping it - no it isn't anyone I know).
Friday morning just as Brad was walking out the door to get the ferry to his massage, our Doctor called. Well, that wasn't right since my follow up with him was booked for Monday...
I knew right away something was off. Sure enough my TSH which should be between 2-5 is reading .001 still. This is the same reason that I was reduced 3 months ago from 125g to 112g, and now he has reduced me again to 100g. I'm thinking I won't wait the full 3 months next time... 2 should suffice to have my body regulate to the new medication level before I get it checked again.
Just a side note here: I write about this stuff more for me than for you guys. I have a terrible memory since my stroke in 2002 and so this is a great way to keep those memories and details easily accessible and it could help someone else who is completely unaware that the thyroid problem is so serious, as it regulates every organ and without it -- well, you die, like I almost did in April.
Enough of that....
So about business... Well, its going great guns. In my first week (Thursday to this past Thursday), I sold about $250 which is pretty good since items are $7-$9 each. And, of all the things I sell I would have thought the candy would be the hot ticket item at Xmas but what has been selling like crazy ---- BRUSSEL SPROUTS! Can you believe that?! I'm out of them already. I have to go to town today and get some more, it was just an item that was in the discount bin as it was expiring so I picked it up thinking it would be something unusual just to have on the list for the odd person... turns out Brussel Sprouts ( and Asparagus) are a popular thing. Who knew.?! 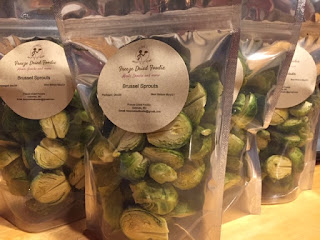 Today, I am trading 4 Unicorn Poop with a local woman who makes Chocolate Bombs and I get 5 of those in the trade... I'd never heard of them but damn do they look good. 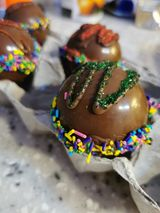 I'm actually thinking about cutting back because my Corporate brain has done it again. I have the Etsy shop, I'm on the local online market and the Salt Spring online market and I also opened a FaceBook site and paid to promote it. So now I'm monitoring to see which one I can close because I refuse to get overwhelmed by this. It is supposed to be something fun I can do as a hobby, not a full blown business. And I ordered a banner so I can set up a table and sell on the road by the shopping area where I have seen others selling their wares - I expect this to arrive early next week.

I am not going to open to the U.S. market, simply because it will just become too much. Should anyone I know wish to purchase, I can make those arrangements. Just contact me through the Etsy Shop

I was contacted by the woman who created the Salt Spring Online Market and asked to participate, I had decided not to participate as it wasn't functional to be going down there on 4 ferries (return trip) to sell 1 $7 item. But then she offered that I could bring a bunch of stuff down to her and she would dole them out as they sell. How could I refuse that? I couldn't. So I drove a bunch of stuff down to her several days ago. Also, another woman there had ordered 2 Unicorn Poop and 2 Reindeer Poop so I delivered that and she took a 3rd Unicorn Poop when she saw them because they looked soooo good. And a friend bought a Brussel Sprout while I was there, so it was a productive trip.
The local market here opens every Thursday and already I have 5 items sold in this weeks rotation, so things are definitely going well on the business front. When it closes late Monday night, I should have several purchases lined up.
The system is that items are purchased Thursday morning - Monday night. On Tuesday sellers package up the orders and on Wednesday they are delivered to a central location where the market then takes them out for delivery to the buyers. Good system, I must say. Some people have contacted me directly to buy, either because they want the item before the delivery day or they don't want to pay the delivery fee.