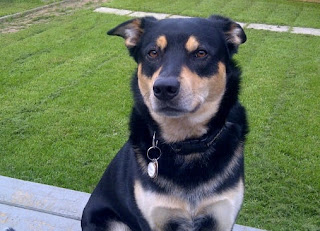 We took Robbie to the vet on Tuesday, he has been having difficulty maneuvering and we've noticed that he has been acting strange and looking at us in that way he has when he is in pain or uncomfortable.

With pause before going up the stairs and then hopping both back legs up each step instead of one back leg per step as he has always done, we knew something was off but with the holidays...

Anyway, we were finally able to get him in, seems he has developed arthritis in his upper back. Which is why the symptoms were coming and going. He has gained 6 lbs since his last visit to the vet 3 months ago and so has been put on a strictly enforced diet which should help his back as well, obviously. He has been put on pain and anti-inflammatory medications as well. He also received a shot of arthritis medication that needs to be repeated every week for 4 weeks. He is not allowed to walk for the month either and will be gradually increased in his walking ability once he returns to it.