Oh Brother, The epitome of Spring

As long time readers will know, I have a sewing machine... I had a different sewing machine last spring but the feed dogs (the little grippers which move the material) would not raise above the plate and so were not moving anything but my temper. I tried to fix it myself as the closest repair was in Nanaimo (we were still on Salt Spring then) and has a waiting list. Unfortunately, I wasn't able to so I threw it out and bought a new one when we moved up here to Gabriola.

Recently the new one did the exact same thing!!!!! I am soooo *@!&*! upset, I can't even.... and because it is so new there are no repair tips online that I could find.

I tagged @brother_support on Twitter and finally (on Monday) managed to get ahold of 'Live Chat' who after I sent them a video of the problem said they would be 'escalating this to the repair specialists' who would get back to me in 24-48 hours... I figured that was a brush off and so tore the damn thing apart about 5 times trying to sort it without any luck. 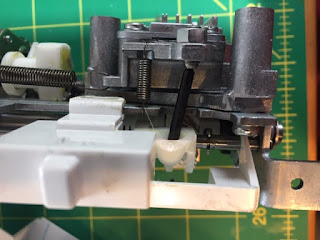 This black stick in the middle of the picture fits into a little cup as you can see above, that cup should move side to side as you move the switch to raise and lower the feed dogs but it only goes one direction and will not return to the lifted position.

Finally called the repair shop to get put on the waiting list.

About a half hour ago, I received an email from Brother that they will be sending me a new machine! The same machine and refurbished but presumably they are aware that this is a problem and have found a solution... God help them if the 3rd machine does the same thing I will go postal.

On a happier note: Spring is enroute, the days are getting noticeably longer and.... 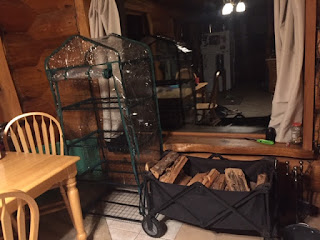 The epitome of Spring
My new greenhouse sits beside the winter wood pile. I received notification this morning that the seeds I have ordered have shipped - from Richmond, BC and so will likely be here Monday, Tuesday at the latest I would say.... WooHoo!
Soon it will be the height of summer and Stacey and I will be paddleboarding again.