Walk, Sewing and a Creation

Stacey invited me along for a walk to Sandwell Beach with Jon and Jim the other day. I really had to push myself to go but in the end I did go. Just as well it turned out, I stopped to use one of the bathrooms (as I am prone to do) and there was a dog in the bush that was barking to get our attention. Not a big long scare-you-away bark but a hey I'm over here bark (dog owners will get what I mean).
We realized that the dog was sort of stuck on the other side of a fallen log on the front side of which was a 3-4 foot drop and this is at the bottom of a very steep embankment. The dog was clearly old and unable to get over this fallen log and so was caught on a small ledge basically. Stacey and I managed to coax the dog underneath the log through a very tight gap.
We began asking passersby if anyone recognized the dog who had a collar but no tags. A couple said someone was looking for a dog and they even had her phone number in case they came across the dog on their walk. We attempted to contact the owner but with spotty cell service in that area one or both of us were in a blind spot. They advised us that she lived up in the direction we were headed.
We tried to fashion a leash from a washed up rope we had found but to no avail (couldn't cut a piece off) so the lady who had the owners number loaned us her camera bag strap so we could walk the dog up the trail to where they had seen the woman and the general area of where she lived as it was on our way and they were going the opposite way at that point. She later picked up the strap from us. 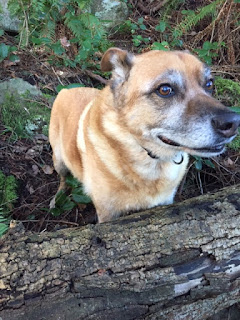 Baloo
The dog did not want to leave the bathrooms, I assume the owner had gone in and the dog did not see her come out. Turns out Baloo is deaf and so apparently became separated during the time the owner was in the washroom. We finally coaxed him to start walking but he was very unsure and constantly looked back for a long time...
As we reached a road with a signal - in typical fashion --- my phone died. It was the only phone with the owners number on it. So without any choice we continued our climb back up to my Jeep so I could plug the phone in and call the owner. Once we connected with her it was only about 10 min before she arrived to pick up Baloo who was very tired after his long adventure.
During all of this the guys (Jon & Jim) were saying we should just leave the dog that it was a stray and just looking for attention but Stacey and I were sure this dog was someone's pet as he was clearly looked after, not mangy at all. Had I not gone on that walk, the guys may have convinced Stacey to leave the dog behind.
I received the shipping label from Brother and Mabel has shipped (I just made up that name now LOL). Anyway, it is enroute back to them and I assume they will have received confirmation that it has been received by the shipper and will now send my new one off to me. My sewing chore list is getting long. 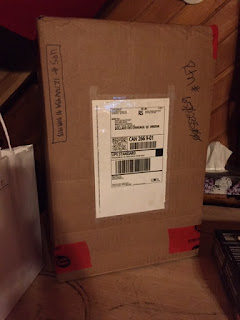 All packed up and ready to go.
We had some styrofoam that (because this is BC) I had no way to get rid of as you can't put it in the trash or recycle, it must be delivered to the dump... and we don't have one on the island... so I was able to protect the machine inside a perfectly sized box, so that worked out fabulously.
I had seen a thing online somewhere about chocolate bowls and decided to make one for Stacey and one for Brad for Valentines Day. If it worked out, I figured I could add it to my repertoire for special holiday items -putting FD product in at Easter, Vday, Xmas, etc.
Having checked with my chocolate making guru friend who lives in Ontario, I went to Bulk Barn to get the required chocolate. Being unsure how much chocolate each bowl would take.... I prepared a few, okay 5. I washed and then coated them with Olive oil to prevent sticking - which I think may have been a mistake. I stood them up in small bowls. 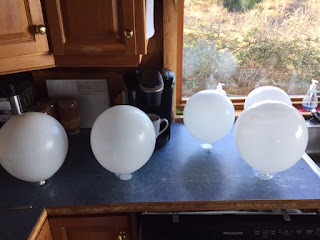 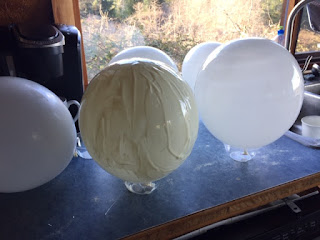 1st coat of white chocolate, I did 2 balloons.
As I was moving one Brad called out to me about something and pop I killed one balloon. 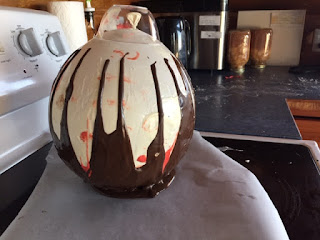 White, Red and then Chocolate. I should have made the white thicker and not spread it across the balloon. Put in fridge for 15 min or more before adding next layer. Slowly and gently coax the balloon away from the chocolate. Pierce a small hole in the top to slowly release the air - do not 'pop' the balloon. 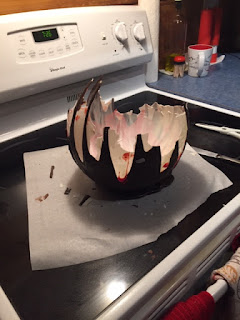 Finished product is pretty cool - now to add FD'd strawberries to the inside...
Lessons learned:
1. Make base coat thicker and allow to run as with all coats, jiggle if necessary.
2. Do not oil. My balloon stuck to the inside and I had to burn it with a fire starter gadget which curls         the balloon away from the chocolate, allowing me to remove it.
3. The size of the balloon matters. You don't want it too big as the thinner the balloon the more likely        the chocolate bonds to it, too small and you can't get your hands inside to remove the balloon if            necessary.
4. The temperature of the chocolate base layer cannot be too hot but still needs to be runny,                       additional layers can be hotter.
5. Just because it looks horrible with the balloon in it is no indication of how it will look once the            balloon is out.
6. Use Merckens chocolate wafers. Microwave 30 seconds, stir, 20 sec, stir, 10 seconds, stir, 10                seconds, stir, repeat at 10 seconds until melted.
7. Take care. As you apply the chocolate the balloon will want to move around as the center of gravity        changes.
8. Apply the drip edges first, then dip or otherwise create the bowl portion for each colour before               moving on to the next colour layer.
I very much enjoyed doing this and I'm pleased with the resulting bowl, I think it turned out fabulous for my 1st attempt. I will definitely do these again (and likely soon) improving my technique each time I hope.
Posted by Gone Rogue at 8:28 am