So, in the boating world they use reflector whatsits to keep birds and their droppings off the boats, so... in an effort to try to save SOME of the cherries from the cherry tree I picked up some reflector dangly bits from the dollar store... we only hung them (6 total) on parts of the trees (there are 9 trees smushed together here) that we can reasonably reach, the birds can have the top of the tree... IF, and I realize its a BIG if... this works. Last year, I picked 1 maybe 2 cherries off the tree while working in the garden and then the birds took them all - every, last, one... I was not happy with them at all. 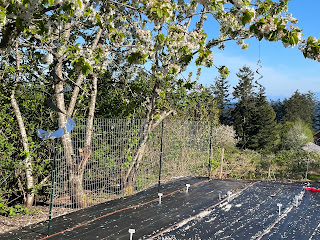 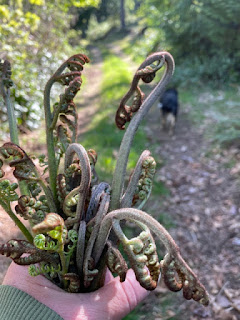 Collected some Western Brackenfern to add to lunch.
It is important to note that Western Brackenfern has shown in 'recent studies' to not be as wonderous of a snack (cancer causing apparently) as previously believed. However, as I had already collected them, and people have eaten them for thousands of years... I figured eating them once with lunch wouldn't kill anybody, so we did - eat them with our lunch. These fiddleheads are not as pretty as the East Coast Ostrich fern fiddleheads but were pretty tasty anyway.
Note: MUST boil 15 min, ice bath, fry with butter and garlic.
We will not be making them a staple but it was a good one off snack.
As for my weather tracking: Remember yesterday 'they' said 67mm between Friday and Wednesday next week?>>> ... 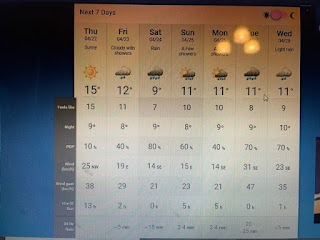 Well this morning they've had a change of heart already: 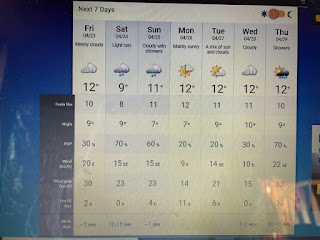