The Greenhouse is Complete 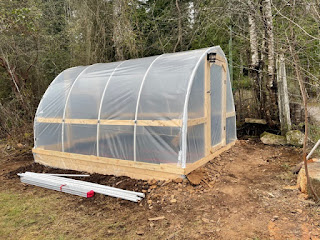 Exterior shell with solar light outside
The day after the shell was completed we had a massive windstorm with 70km/h (45mph) winds that took out power all around the island for up to a whole day in some places, including us.... we kept peeking out at it but the greenhouse did not budge. She is rock solid. 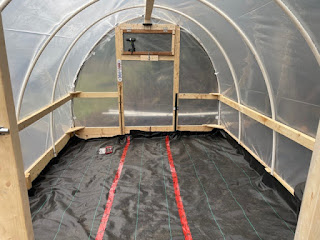 Empty with ground cover to keep weeds out as a greenhouse is designed to make things grow, and we just want to decide WHAT things grow. A solar light in the center on both ends inside also. 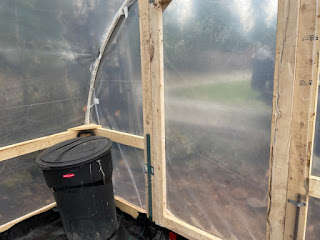 We will use a left over black garbage can (our area just switched to automated pickup) to hold water for watering the plants and also a potential heatsink (slow release of heat) for cooler weather. 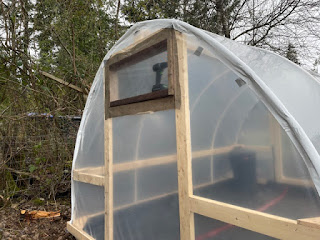 The rear window (at the top to release heat) has mosquito screen on it...
We may add a mosquito netting to the front door but we're playing that by ear for ease of entering. We will add it if we deem it necessary - and we might as we live on an orchard with plenty of bees and the like. 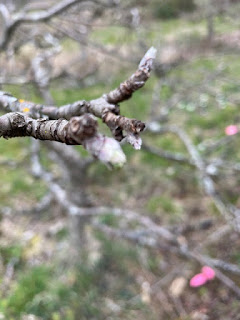 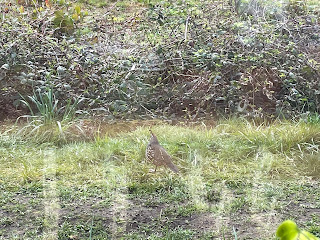 There is a family of Quail that frequent our bird feeder, finally got a pic of one - but hard to see. (south of center) 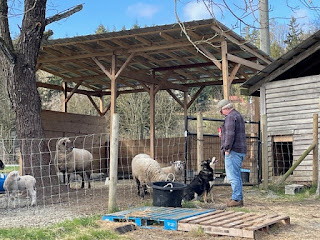 Robbie and I took Brad to his massage (he is a sheepdog, and they have sheep....) he had absolutely ZERO interest in the sheep. So weird given how he reacts when lamb is cooked... the sheep were curious about him though. 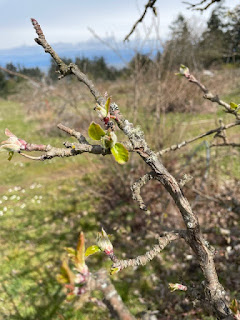 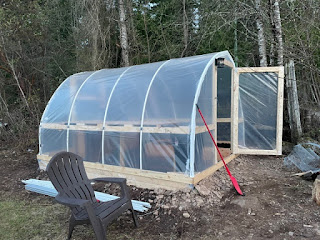 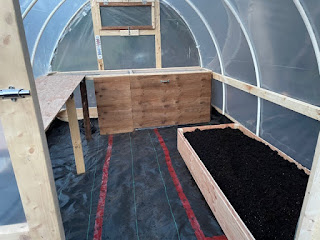 Left to Right: Folding table (legs collapse), Starter warming box (to keep starts warm overnight) with drying rack on top (for onions, squashes, etc that need to dry) and a planter box.
*Starts are sprouted plants, for anyone unfamiliar.
** Caveat: It will probably never be so clean again! 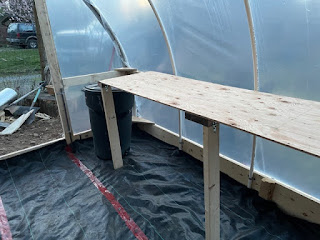 Water bucket will sit in the front corner. 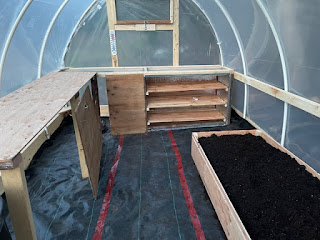 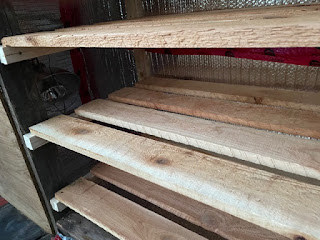 Inside the starts warming box (heat lamp on left, several feet away from the wood) the entire box is insulated with reflectix insulation to keep the heat in and the cold out.
The plan:
Plants will be started (from seed) in the house, once sprouted ( I call it 'cracked') they will be moved to the warming box where we will put them on the counters during the day and tuck them away in the warmth for overnights. As appropriate temperatures for each type of start are reached, they will remain on the counter within the greenhouse until planted in the main garden or plant box within the greenhouse.
I picked up an organic salsa seed pack today and expect to plant those in the greenhouse planter this year, we will probably also plant a few in the main garden to compare growth, etc.
It became evident that we needed to conjure up a system because our main living space in the house has been overrun with starts for a couple of weeks now - and personally, I cannot function like that....
I prepared a great many of the 'cold weather' starts today (Beets, Radish, Kale and Lettuce) to make their move to the greenhouse - probably tomorrow as its just too late tonight to haul them around in the dark.
The peppers and other more delicate plants will remain inside until there is available space in the start warmer. I will need about a week to 'harden' the cold weather starts off and put them in the garden, although our local 'last frost date' is technically Monday, April 5th... because they have been in the house, I will take the time to allow them to adjust to the greenhouse and harden them off (slowly introduce to the outside temperature) before putting them in the ground.
I'm absolutely thrilled with the way the project turned out, a lot of thought went into the design to make the best use of space. The test will be in the use of it.....
Posted by Gone Rogue at 5:00 am