We had to break him out 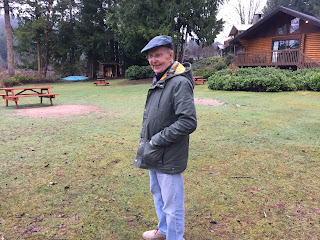 Ann and I went out to run an errand, One of those girly shopping trips that Dad had no interest in so we left him at home in his comfy chair.

We had forgotten to turn on the AC so I suggested we text Dad and ask him to do it. Well that was a bad idea…

He texted ‘ok’ to the request then moments later something gibberish. Then SOS.

We immediately headed for home while calling a neighbour we thought would be home and asked them to help Dad.

Sure enough he had fallen. He lost a fair amount of blood from his nose and we called an ambulance.

As he was loaded in the ambulance and Ann and I came out the door the door caught Ann’s arm somehow causing a bruise and small cut, nothing urgent but …

He arrived at the ‘Met’ hospital at 2:20pm. He then spent the next 6.5hrs in a hallway (now remember he is 81) with no food or drink but was given a warm blanket. 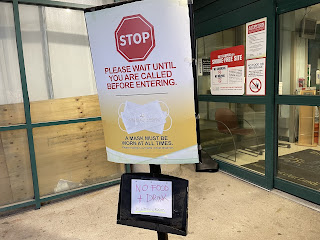 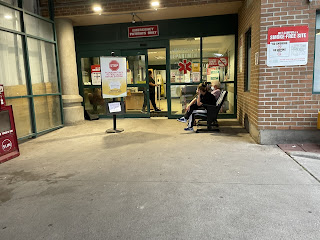 Because of Covid Ann was not allowed in to be with him until he got a ‘bed’, which of course didn’t happen.

Ann and I decided to break him out. Clearly he was not a triage priority and he has a pre- arranged home visit with a Dr in the am. Ann called him to see what he felt about that.

He was in agreement so we grabbed the keys and went to get him. He came out of the hospital at 8:40pm.

Straight to Wendy’s for a chili which he loves and then home to unwind before bed.

Mechanic was unable to find anything wrong with the truck. Checked batteries, alternator, starter etc and tested for a short in the wiring but came up blank. He said ‘Everything happens for a reason’.

Clearly it is not time to go yet.

I will be here at least one more day to keep an eye on Dad and make sure he’s alright before heading off.

I will also run the truck a few times to make sure it’s ticking properly.