There are 2 barn cats on this property. Robbie has been sussing out whether they are friend or foe, this black one we call Boots, there is a white with grey one we call Snowden... I don't know why, it just came to me. 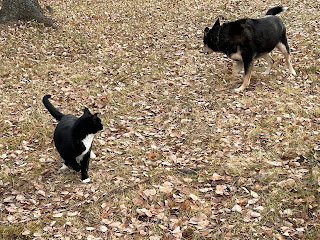 They are getting along and neither cat has shown interest in the chickens which is great.
Brad's Mum sent us an old Italian recipe that his Father had so Brad cooked it the other night. Spaghetti and meatballs. Not my favourite, but this was very tasty and I did really enjoy it. 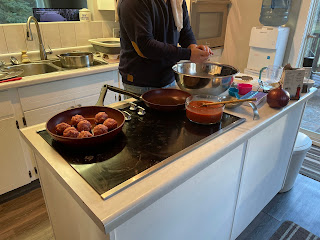 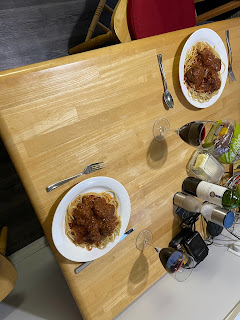 We even had wine with it.
As I mentioned in my last post, I've been fighting humidity in the coop. Not everyone bothers, I know but because we don't know the age of these hens (only a guesstimate) we want to make sure we get some eggs from them before we send them to freezer camp.
Ideal conditions for laying are between 7-27C (44-80F) and between 50-60% humidity. Other than laying, humidity is important because high humidity and freezing temperatures can cause frostbite on their toes and combs - and likely other extremities as well.
We had closed the wall between the 2 sections as 1 side is for chickens the other will house rabbits but with the humidity issue we decided to create a mesh window for ventilation. The 2 main available walls for windows or mesh gaps are on the northwest side of the building and our weather comes from the northwest so those 2 walls are not an option, hence we opened up to the rabbit side. 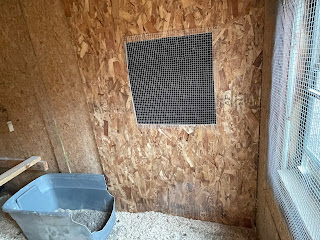 Mesh window installed
We have rabbits coming mid month and I was going to make the hutches for them but found a local woman who has just begun. making them and she gave me a price that I couldn't refuse. So they are also coming mid month. I have made the little bunny houses for inside the cages and am currently trying to source the hay and straw they will need.
Undoubtedly, I have mentioned in all this time that I have IBS (Irritable Bowel Syndrome). Because of this, I have been drinking a Tim Horton's French Vanilla Cappaccino every morning for roughly 16 years. Not good but it was the only thing that kept me going - so to speak.
I recently came across some info which suggested that raw milk will solve my problem, so I called a local farmer we've met since we arrived here and I've been testing it to see how it works. So far, so good!
Posted by Gone Rogue at 4:00 am