I ran into town to get the mail as a parcel had been delivered. When I returned home I went straight out to the chicken coop to collect the eggs.... as I was walking up the hens didn't run over as they usually do, only 2 were outside and they were kind of 'talking' weird. When I reached the gate I saw a hen laying there without a head.
I broadcast a message into the house on our Google Home app to tell Brad to come out (as I wasn't sure what kind of predator I was dealing with or if it was still around) and as I was opening the gate a cat started meowing from the corner of the building (outside the run).
This is not one of  'our' cats... but a new stray which I had tried to carry into the pump house just 2 nights ago before the blizzard started but it wouldn't have anything to do with it.... Brad had seen it previously on the other end of the property and felt it was 'stalking' the birds but I figured the birds were too big as the other two hadn't bothered them.... I was wrong.
I didn't take any graphic pics as I wouldn't have posted them anyway but here she is packaged up... we can't even eat it - who knows what that cat has. I am so upset with myself, but its a valuable lesson and affords us the opportunity to ensure it doesn't happen again. 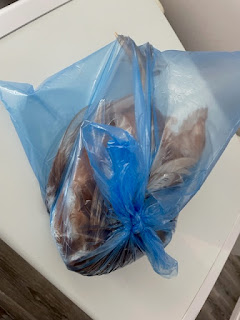 Our first loss
Because the bird was not frozen or rigid, I assume it happened just before I arrived home and the cat ran off when it heard the car.

The remaining chicks are all a bit ruffled and so I have put them in the coop for the rest of the night to help give them a sense of security.