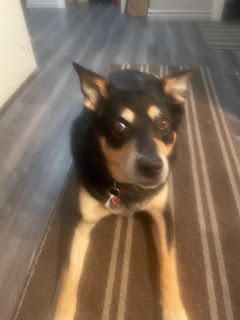 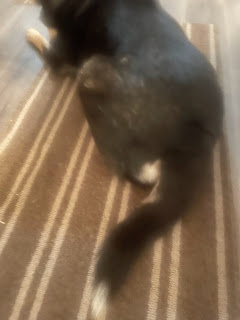 This side he gets from his father :D 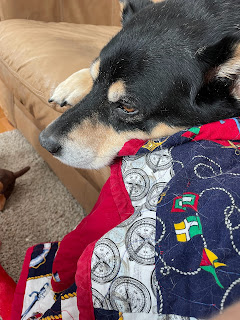 Chilling with the kiddos ( Brad & I ) watching TV
So you may recall that I like gadgets. Well, I have a gadget in the chicken coop/rabbitry so that I can monitor the temperature out there (keep in mind this is our first time raising chickens and rabbits).
During that super cold (polar vortex) spell we just had, this is the result. Now, I do have a heat lamp in the chicken coop which comes on about 6am-8am and again 6pm-9pm. Overnight however, they are on their own for body heat so I wanted to make sure I wasn't killing them....
We were getting about 10-11 eggs a day until I found the hiding spot which held 22 eggs... we are now getting the full monty of 14 eggs for 14 chickens.
Note: the red is -20C or colder. 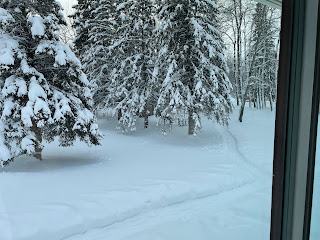 The backyard is beautiful with all the snow. The paths are to the coop/rabbitry and also heads to the right for the cats in the pump house (pump house is heated so the farm cats live in there). 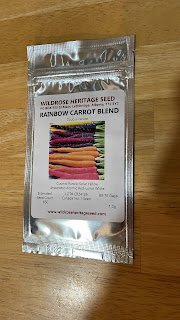 Some seeds are in...
These seeds (and many more) I ordered from Wildrose Heritage Seed Co. here in Alberta. They are heirloom (non-gmo), local and they send them in a zipper mylar so that you can save your own seeds at the end of the season, which I absolutely love. Unfortunately, they didn't have every seed we wanted so I also ordered from Heirloom Seed Vault also in Alberta, but those seeds have not arrived yet.
Meanwhile, though.... the shelving and grow lights have arrived and I managed to get it all set up in the basement. I put my St John's Wort. and a brand new ginger plant under the lights hoping to give them a little extra boost. 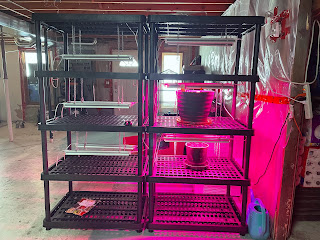 St John's Wort above, ginger below
My SJW is essentially on its last legs and I desperately want to save it. I'm not sure if its an easily accessible plant, not that I ever looked for one before but as soon as I saw one I bought it and do not want it to die on me.
Posted by Gone Rogue at 4:00 am