Sorry for the delay in posting but its been very busy around here. We had a lot to do to get the house ready for the Realtor.

I had always said that when we sold the house we would use a Realtor friend of ours (Bev), because when we arrived in this area she was our Realtor (and friendly neighbour, too) although when we actually purchased a tiny house quite a way from her general area we did it without her, so it seemed only fair to me to give her the large house listing. Because Bev is so far away, when Brad posted a remark of selling on FaceBook and a local Realtor reached out, he thought that was the way to go. So go that way we did.

The local Realtor was due to arrive at 4:30pm yesterday so we ran around like chickens trying to get the house sorted out and ready. We have built additional land on one side of the house, taken the ensuite bathtub rock wall off to revamp, had to finish the trims on the far side of the lower half of the stairway, sort through a bunch of stuff for a Moving Sale, and then clean the house which by this time was a disgusting mess.

Now I'm known for being a clean freak, but the house was a hot mess. This damn dog (Robbie) sheds like you wouldn't believe and I would literally have to vacuum the entire 3000 sq ft everyday just to keep up - and I refuse. Add to that that we were working on the place and the mess was astronomical! 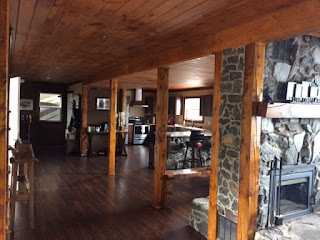 By 3:50pm we were finished all that we were going to get done, the house looked normal once again and I headed off to beautify. Mr. Realtor said he would call to confirm at 10am for our 4:30pm appointment, and when he didn't - I knew.... Brad wasn't convinced but I know how the 'Service' industry works in these parts, so we carried on just in case he just arrived for the appointment as a neighbour suggested he would.

He didn't. No phone call, no appearance. Nothing.

What a gong show the 'Service ' industry is around here (in fairness, its not just this guy). You'd think working a commission job like real estate that he would be all over a new listing - but nope. This guy only has 5 listings at the moment which is one reason we agreed to use him, so we would get some much needed attention, as we are remote we need all the help we can get to sell this place.

The good news is, we called Bev and though she is away at the moment, she will call us next week when she gets back. So this allows us a few more days to get some more stuff done. The deck needs a shelf thing built and the bathtub can be trimmed out. These are the only things we were unable to finish in the allotted time yesterday.
Posted by Gone Rogue at 4:45 am