I had a great birthday!

We pulled up stakes this morning and headed into town. Left a chair with a rock on it as per instructions and sure enough it was still there when we returned. Bonus gift of the day!

We first drove over to 'Discount Solar' and discussed our situation with them, and yes it turns out my suspicions were correct about the battery wiring setup. In any event, we need a couple more batteries because ours are at 100% well before noon so a couple more batteries will allow us to do more with the electric our solar is creating. Larry there at Discount Solar said if your batteries are full around 4pm that's a good balance basically (I'm summarizing here). We're losing about 6 hours of energy generation capacity because we don't have enough storage space. This confirms what we were told at the Woody's in Calgary that we went to a month ago. We were also advised that installers often use smaller wires than they should and these guys confirmed that.

After leaving Discount Solar we went to Parker, AZ. There is a Walmart there and the birthday bunny bought me an INSTANT POT!!!!! WooHoo!!!!! So excited to have this baby. Also got 2 backpacks with Hydration reservoirs, Brad got 2 pairs of shorts but they didn't have any for us girls, we also got an HDTV Antennae (as seen on TV) whatsit that Brad is currently trying to configure, ($15) so not a big deal if it won't work. We realized today that the previous owner had satellite and so likely the antennae on the roof is no longer connected to anything. Don't know but its a possibility. When we got settled back at home, my Mother-in-law had also sent me a Walmart gift card and a package of plastic containers that all sit inside one another taking up very little space. Thank you. 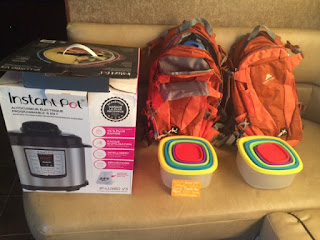 It got to 39C here today (bloody hot in Fahrenheit) and we wanted to go for a meal... unable to leave the dog in the RV we went to the Blue Water Resort & Casino and put his 'service dog' collar on him. No problem. Had a lovely meal at the casino in the air conditioning and I took Robbie's bowl with us and asked for a bit of water for him which the waitress brought in a cup and I poured some into the bowl for him to make sure he didn't splatter it everywhere.

Having trouble with this bike situation. Can't seem to find a bike rack. Bikes are everywhere but we can't get the bikes until we have a rack to put them on. Even stopped today to look at RZRs and the guy says yeah Canadians have no trouble plating them here.... I'm not so sure. And if its easy to plate something then perhaps we should just get a Jeep since we can drive a Jeep anywhere and the RZRs are only good in specific places.

Then we needed to find Brad a hat as the Walmart had one for me (you'll see that later, I'm sure) but nothing for men. Back to Quartzsite we went to the Dollar General and he managed to get the last 'brad appropriate' (big head) hat on the shelf. Actually looks pretty good with his shades and hat on.

Figured since we were out we should dump the tanks so we ran down the highway and got that done, reloaded the fresh water and came 'home' to find our spot reserved by my chair and rock just as the guy at the entrance kiosk said. 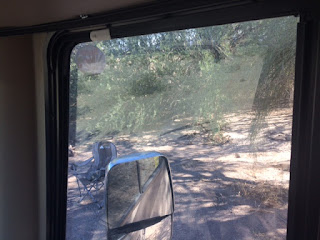 Tomorrow we are going back to Discount Solar and the guys are going to have a look at our setup and get it sorted for us. I know we could do it ourselves but we're not good at this and frankly its just not our forte. Being electrical, we are quite happy to let the 'guys in the know' deal with it and we can be confident that it will work properly AND not burn the rig down.

All in all it was a great birthday although I STILL haven't been able to go Geocaching... and tomorrow doesn't look likely either but the shop closes at 2pm so -- maybe?!

The antennae thingy isn't working. I've suggested we remove the TV altogether and put my computer monitor up there instead. We both have our computers with us (yep, we know) and I don't want to throw mine out. Its too big to fit on the desk in the bedroom and Brad can't use the desk because the bed he'd sit on is too far away for his injured back so he uses the desk in the front. Replacing the TV with it (let's face it, TV is outdated anyway) solves my problem, allows us to watch everything we want to watch and I can type my blogs on it as well. Also, we'd lose the weight of a fairly heavy TV.

Incidentally, anyone have suggestions on what to do with said TV and previously said printer? Do I just throw them in the dumpsters? Guess I'll have to ask the kiosk guy.

Thank you to everyone who sent birthday wishes my way, I appreciate each and every one. Now, where's the Smirnoff.......