What a blast we've had this Christmas. When we left 'home' we never expected things to go the way they have and certainly didn't expect to be with so many new friends at Christmas!

On Sunday, Vickie and Bruce had a Xmas Eve Brunch, Potluck so there was plenty of different options to eat. I was so busy scoffing and gabbing that I forgot to take pictures through most of the event, but I did get a couple. 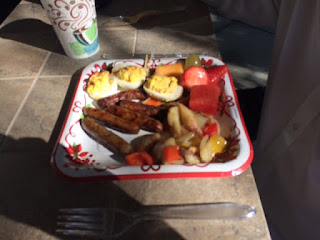 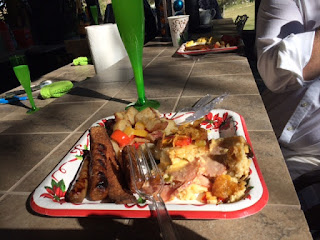 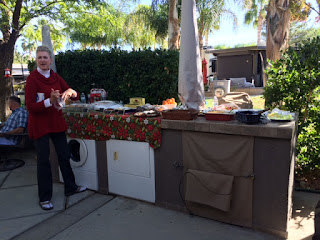 Vickie - Hostess with the Mostess

On Christmas morning Robbie was soooo excited. He understands -somehow- that he gets stuff, likely treats, when Santa comes. As soon as we were out of bed and I told him Santa had been he ran over to our stockings and started pawing at them... "let's do this" he seemed to be saying. Brad helps him open his presents, literally just holding it so Robbie can tear the paper off himself.

Come on, there's stuff in here for me 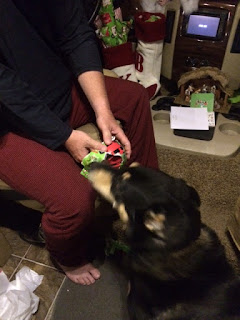 Pulling the wrapping off 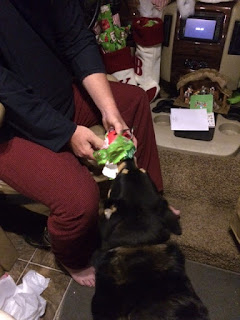 A Nerf for dogs ball!!! Yippee!

Janice and Dave who are part of the group we have been hanging with were gracious enough to include us in their Christmas Day dinner. (The group are mostly Entegra owners, with 40+ ft coaches and we are lowly 30fters..)

Again the dinner was potluck and I made 2 small Broccoli and Cheese dishes which hardly anyone touched. Bonus for me as its one of my favourite dishes and I only bother to make it for these events and usually it's gone and I only get a small bit myself - I got to bring all but a couple of servings home to eat all to myself!!! Merry Christmas Bonus.

There was a ton of food there and I sampled most everything, filling my plate far more than I usually would. It was all so delicious, I filled another plate. Man oh man was I full. Brad was so full he offered to do the dishes!! Knowing if he sat down he'd likely fall asleep from being so stuffed, he figured the dishes would get him over the hump and keep him awake. It did. Everyone made quite the spectacle that he was doing the dishes... all in good fun. 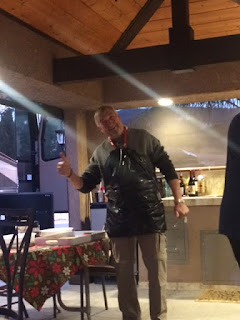 No apron? No problem. Glad to the rescue. 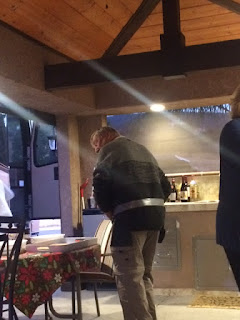 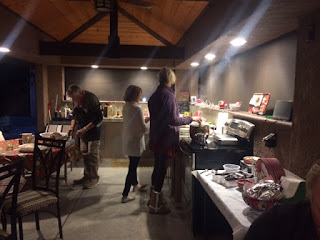 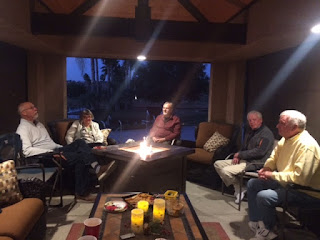 As I've mentioned before Brad likes to carry on like an Archie Bunker with a 'women should be in the kitchen routine'. Imagine everyone's surprise when he broke their pre-conceived notion of him.. Made for a lot of laughs. 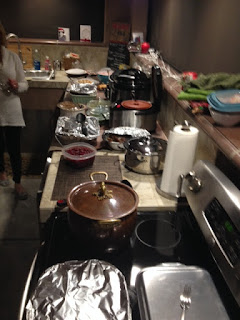 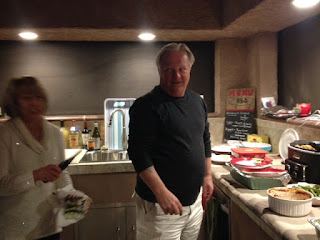 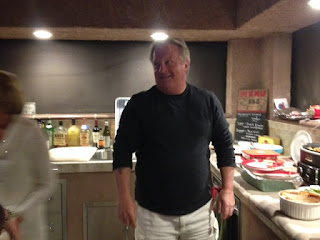 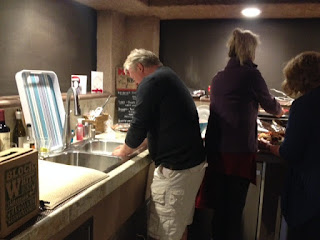 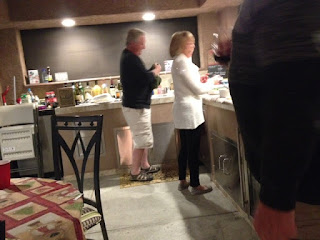 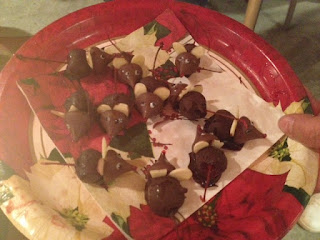 Someone welt to a lot of trouble to make these adorable little mice, didn't notice if 3 were blind.


After dinner we all sat around chatting and then Janice introduced a game we'd never heard of, quite simple. I have no idea what it was called, perhaps Vickie will include it in the comments if she is recovered enough at some point to read this blog..... Vic?

Before we knew it it was 9:30pm and we headed home. We had hoped to visit with Karen and Dave at some point yesterday, but time just didn't allow for it. I trust we will see them today at some point.

One of Brad's gifts was a new soft top for the Jeep, we intend to attempt to put that on today... we'll see how that goes and I will take pics. Perhaps we should have Vic & Bruce over for a couple of drinks first so it becomes a fun task instead of a stressful one...